"Uptown, downtown, all through the underground, Mineshaft takes you where the action is!"

Here's what people are saying about Mineshaft!


"Mineshaft is the best magazine in America. It's the only thing I read anymore."   -Jay Lynch


"...a breath of fresh air from some universe next door."   -Art Spiegelman


"That magazine is a bonafide, world-of-comics treasure; a new issue is a celebratory moment."   -Tom Spurgeon, The Comics Reporter


"Mineshaft is one of the best kept secrets of the magazine world.   ...You'll find in its pages some of the most uncompromising artist/cartoonists and writers working today."   -Andrei Codrescu, The Exquisite Corpse


"Reading Mineshaft, I am conscious of its authenticity.  I imagine that in future issues there may be ads for futons and hookahs; someday there may even be an online version.  In the meantime it's one of the few true print vehicles around that carries the smokey torch of the disavowed, disenfranchised, lapsed, subsumed and beat to shit Counter Culture." -Justin Green, author of Binky Brown Meets the Holy Virgin Mary


"What you are doing, which is so important, is using QUALITY art.   Mineshaft is like a quiet little beacon of laser creativity that continues to burn with a purpose."   -Mary Fleener


"You're singlehandedly keeping the spirit of the old Underground alive & well!"   -Bill Griffith


"In our society where everyone it seems can't wait for the latest 'i-pod' feature it's great to see MINESHAFT taking the long view, exploring with ink on paper how the artistic culture is surviving in the hidden corners of America and the world. MINESHAFT artists are able to look within to find that elusive spark of truth/magic known to mystics, shamans, zen hermit monks, and alienated graffiti artists. For me MINESHAFT contains a message of personal healing, a feeling of belonging to a community of artists who express their feelings about life with love, honesty, humility, and humor."  -William Crook, Jr.


"I really enjoy "Mineshaft" - there all these zillions of dull, unoriginal, stereotyped magazines.   "Mineshaft" carries me back to romantic times long ago when I did a mag, "Tele Times," about street-people and comics."   -B. N. Duncan


"Everyone reads MINESHAFT. It is the major publication of what's left of the hep subculture. Not ONLY comix... but it covers everything else that is interesting as well."   -Jay Lynch


"Thanks for the copies of Mineshaft.   It's a grand publication, harkening back to the glory days of self-pubs."   -Jim Woodring


"I realized that I hadn't written you before now to tell you what an amazing publication I think Mineshaft is.   Let's just say that there aren't that many new pubs that I look forward to reading these days, but Mineshaft is the rare exception. "   -Tony O'Neill


"As you probably know, there's a quiet dignity to self publishing. You produce a fine publication with real eclectic appeal to the discerning few."   -Robert Armstrong


"MINESHAFT is the last of the great comics zines..."   -Rob Clough, The Comics Journal


"Recently I've spent time going back and reading old issues of MINESHAFT. Man, it holds up well over time, very high quality content, mercifully free of the usual commercial crap or pretentious arty-farty nonsense that pervades 99.9 percent of all print media. Mineshaft is anti-propaganda, anti-public relations. It is a modest little package speaking honest truths in words and pictures, thanks to you and Gioia's sharp editorial judgement."   -Robert Crumb in a letter, January 1, 2014

"A toast to... Mineshaft" - Various notes on Americana by George Hunka


"Sweeping The Underground: Mineshaft #24"   Review by Rob Clough in his "High-Low" comics column


"Crumbland: a brief guide" in the British newspaper The Guardian 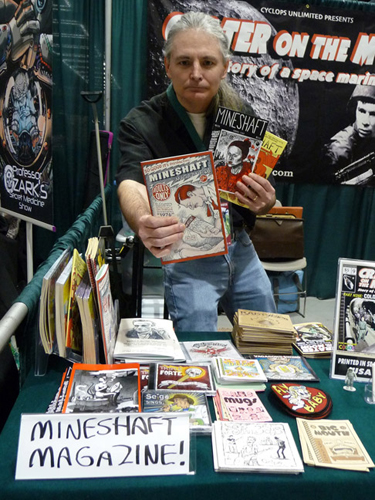 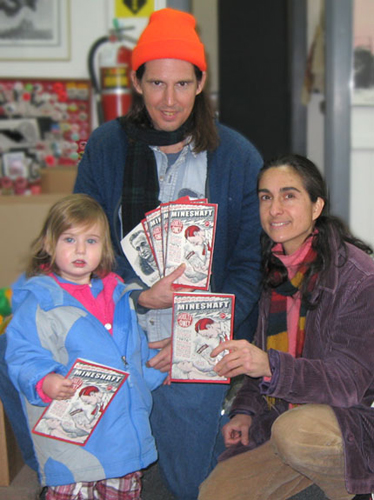 JR Helton, "MASSIVE Mineshaft fan and contributor," in the south of France (2011) 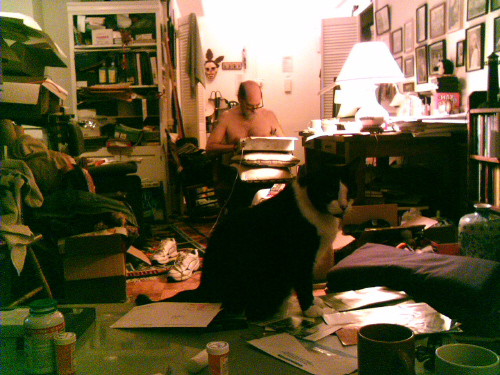 Kim Deitch hard at work in his NYC apartment. (photo by Pam Butler, 2005) 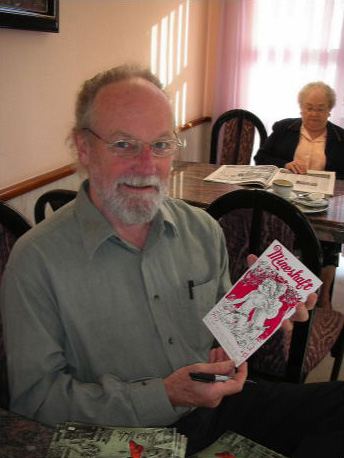 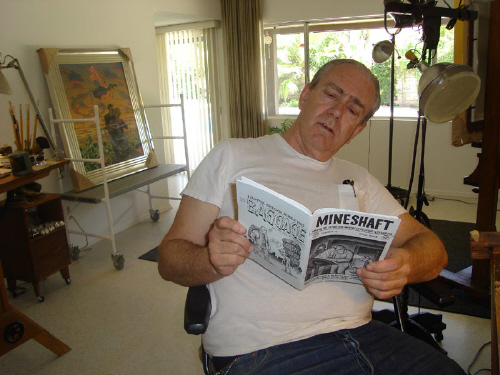 Robert Williams in his studio with Mineshaft! (photo by Heidi Greene, 2006) 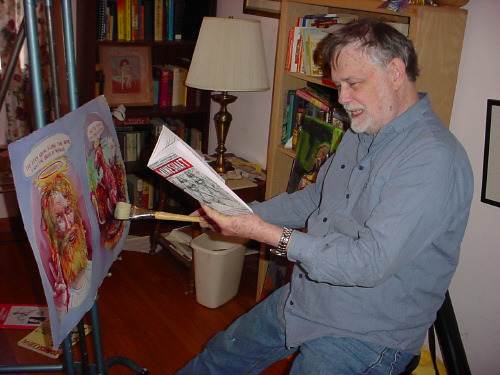 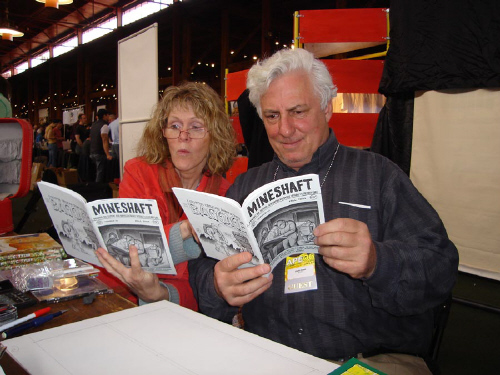 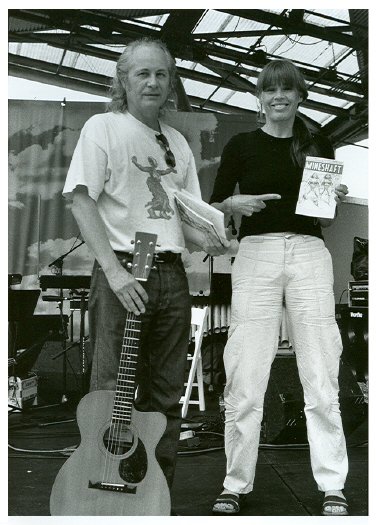 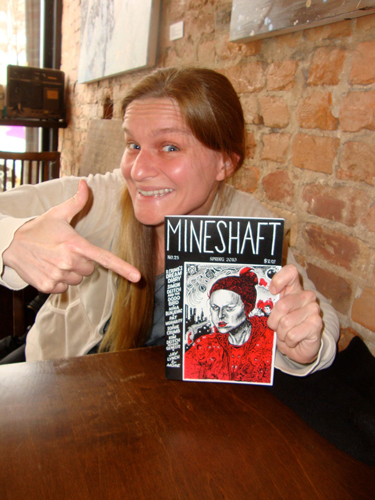 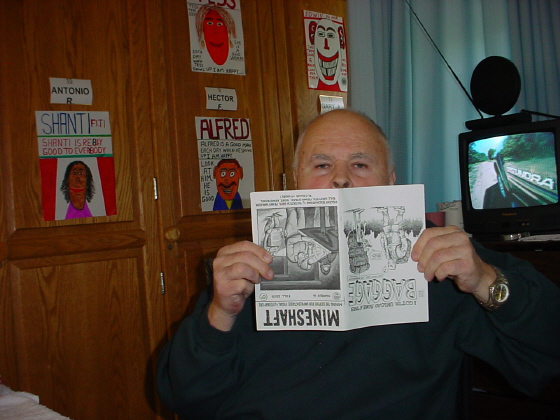 Who reads Mineshaft?  We were happy to hear that the legendary Gary Arlington does! (photo by Heidi Greene, 2006)

Our good friend and regular contributor, the Man of Burlesque and much more-- Bruce Simon. 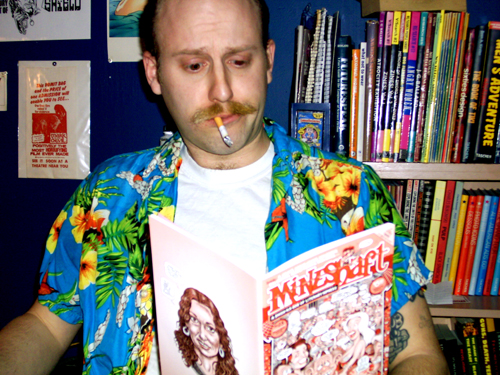 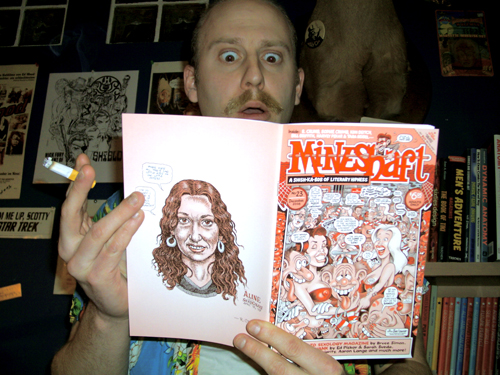 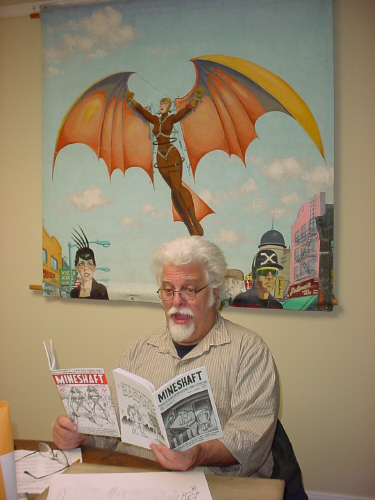 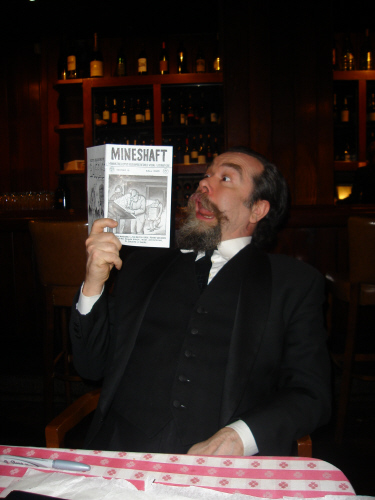